No, I didn’t plan to see the New Year in as I like a good night’s sleep more. In spite of my wishes, I was awakened at the stroke of midnight by fireworks, bells, and whistles going off in our neighborhood. Fortunately, sleep did not escape me and I was out before the noise had even stopped. The previous year did not always measure up to expectations but how blessed we are to have another chance at it. Found some favorite quotes to share that inspire without being burdensome!

“Change doesn’t come in nickels and dimes. It comes in dedication and sweat.” Toni Sorenson

“Exercise is a great leveler. It doesn’t matter how rich you are, you can’t just buy your way into a great body. You have to do the work. I find that comforting. It’s one of the few things in life where we’re all on a level playing field.”
Vinnie Tortorich

“Write it on your heart that every day is the best day in the year.”
Ralph Waldo Emerson

“And now we welcome the new year. Full of things that have never been.”
Rainer Maria Rilke

“Be at war with your vices, at peace with your neighbors, and let every new year find you a better man.”
Benjamin Franklin

“Hope smiles from the threshold of the year to come, whispering, ‘It will be happier.”
Alfred Lord Tennyson

“Resolution One: I will live for God. Resolution Two: If no one else does, I still will.”
Jonathan Edwards

“The object of a New Year is not that we should have a new year. It is that we should have a new soul and a new nose; new feet, a new backbone, new ears, and new eyes. Unless a particular man made New Year resolutions, he would make no resolutions. Unless a man starts afresh about things, he will certainly do nothing effective.”
Gilbert K. Chesterton

“Character is the ability to carry out a good resolution long after the excitement of the moment has passed.”
Cavett Roberts

Just as varied as the people are the New Year’s customs around the world. Here in America, it is basically parties, kissing strangers at the stroke of midnight, and hangovers to begin the New Year. Many people flock to Times Square in New York to freeze in the cold with millions of others to watch the glitter ball drop at the appointed hour. Other countries, however, have their own unique ways to celebrate.

In Turkey, red is the lucky color and what better way to wish your loved ones a Happy New year than gifting them with red underwear to sport under their festive clothing for the New Year’s parties. They actually have vendors in the street selling said red underwear!

In Rumania, it is considered very good luck for the coming New Year if farmers can not only listen to their farm animals but understand them on New Year’s Eve. No reports the average success rate on that. My German mother always told me that the animals talk at Midnight on Christmas Eve but my dog always slept through the magic hour.

An Ecuadoran interested in travel for the New Year can try his luck with this custom. Merely get yourself a suitcase and walk it around the block. If the stars are aligned in your favor and the custom is tried and true, travel will be in your 2015 year. In Mexico, a similar custom will insure adventure in the New Year.

In Siberia, there is an annual custom of cutting a hole in the ice of Lake Baikal and diving to the bottom (in diving gear, of course!) taking with you a New Year’s tree. A little more research reveals that this is not just at Lake Baikal but any body of water that has iced over. In Russia that shouldn’t be difficult to find. A word advice to any of you eager to try, they encourage only professionals to try this!

In Brasstown, North Carolina, they have what is called a Possum Drop whereby a container with a possum is lowered over the crowd. In recent years, however, using a live possum has been banned so they substitute possum road kill or possum stew for the event. No, I’m not sure why!

In Spain, with each stroke of the Midnight chimes, people stuff a grape in their mouths trying to get all twelve in and eaten before midnight. Each grape that makes it, represents a good month for the coming year so, naturally, there is usually intense silence as people try to insure a good 2015.

A nice custom in Chile is bringing in the New Year’s in the company of your deceased friends and relative. Oh, wait, it’s not gross but loving! The graveyards are opened for the evening and people sit by the graves of their family members with lit candles and watch the New Year come in. Seems it would be a good time to reflect and pray and remember.

In many places in the United States, black-eyed beans are considered a good luck dish on New Year’s Even especially when prepared with rice. It is called Hoppin John.

On New Year’s Eve in Denmark, people will throw and break dishes on other people’s front steps. The next morning, the family with the most broken plates and cups on their doorstep are considered the luckiest ones for the coming year.

The Pothariko which translates into ‘The first foot’ is widely observed in Greece. The first person to step into a home on the new year brings good luck to the house. The person designated to enter the house must enter with their right foot to insure that things go ‘right’ in the new year. In addition, the person bringing in the proposed good fortune must also smash a pomegranate on the floor while wishing all those living within good health, good fortunate and an abundance of joy and happiness.

Here’s a good custom if you are single and wish you were not and would love to find yourself engaged in 2015. In Belarus, on New Year’s Eve, single women compete in games of skill to impress the single men and see who might be a bride in the coming year. My favorite is setting piles of corn in front of each of the competing women and releasing a rooster. The winner is the one the rooster approaches first indicating she will be the next betrothed.

Then there are the people in the United States, Canada, and United Kingdom who like to start their New Year with a plunge into frigid bodies of water. I wonder how that works with those possibly suffering from New Year’s Eve hangovers? 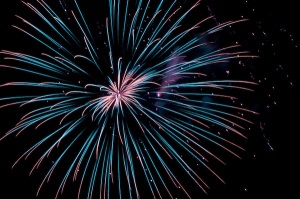