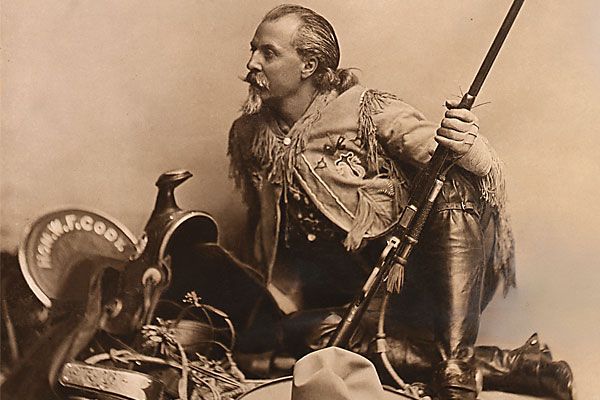 During his active life, Buffalo Bill had been the Chief of Scouts of the Seventh Kansas Cavalry, served as a guide for both the army and the Pacific Railroad and was legendary for his buffalo hunting in the prairies of the American West. It is easy to understand how he eventually came to be known as Buffalo Bill. More people probably know him for his Wild West Show which traveled all over the world.

Today, we can visit both his tomb and a museum named after him and said to be one of the most viewed museums in the United States. When we say he traveled the world, he ventured far from his country’s shores to Europe on many occasions. Buffalo and his group would travel by train to reach their destinations and set up his shows in huge, open places where he could reenact famous battles like the Battle of Little Big Horn. The Wild West Show camped in some open fields in Rome in March 3, 1890 situated in close proximity to the Vatican. Wild Bill was not a Catholic but did send a request to Pope Leo XIII for an audience which was rejected as his group was just too large Later, however, accommodations were made and Buffalo Bill and some of his companions were permitted to be there from the Pope’s entrance into the Sistine Chapel. To this day, you can see some of the memorabilia in the Denver Museum given to Buffalo Bill by the Pope.

Many years later, on January 9, 19l7, Buffalo Bill was near death and even though he had been a Mason all his life, he asked to be baptized a Catholic. His request was honored and he died the very next day.

Now that leads one to wonder if his brief meeting with Pope Leo XIII was a turning point for Buffalo Bill spiritually or did God, as usual, work in mysterious ways.

Can you believe it? There are actually myths in regards to Lent. Who would have thought it but here they are.

Myth
Counting from Ash Wednesday, shouldn’t Lent be 46 days long?
Lent is 40 days long . . . uh, counting from today, Ash Wednesday, to Holy Saturday, there are 46 days. There goes a popular hymn about these Forty Days of Lent. Well, actually, the 40 days of Lenten fasting do not include Sundays. Fasting is not mandatory on Sundays. It’s a break to share the joy of Sunday and another week of being able to praise God within the context of Mass and contemplate the coming Resurrection.
Myth
Lent ends on Easter Sunday
Easter Sunday is not the end of Lent. Before you worry that you have shortchanged God all these years, Easter Sunday is not the end of Lent because Holy Thursday is the close of Lent as we enter into the Passion of Christ and Holy Week observances. The Easter Triduum which is Latin for ‘three days’ begins at the Holy Thursday evening Mass and closed with Easter Sunday.
Myth
Catholics must abstain from meat throughout Lent
Including Ash Wednesday, only Fridays are days of abstinence during Lent. An interesting sideline is that local bishops may have specific rules about what foods should be included in the abstinence. In some dioceses, muskrat or alligator are permitted. I remember a priest friend who once got a call from a woman who asked, “Can you eat frog legs on Friday?” Inquiring minds want to know!
Myth
The Date of Easter is decided by the Pope
Nope, the Pope celebrates Easter but doesn’t determine the date. Easter falls on the first Sunday after the Paschal or Passover full moon. The earliest we can expect Easter is March 22nd and the latest is April 25th. The method by which to calculate the date of Easter was figured out at a meeting of church bishops called the Council of Nicea in 325. Seems to have survived the test of time!
For Your Information:
Ash Wednesday and Good Friday are obligatory days of fasting and abstinence for Catholics. All Fridays during Lent are obligatory days of abstinence – no meat!
The rules for fasting are obligatory from age 18 until age 59 years of age. Fasting is when a person is permitted one, full meal and two smaller ones which should not equal the full meal. The rules of abstinence from meat are binding from age fourteen onwards.

“The morn has spread her crimson rays,
When rang the skies with shouts of praise;
Earth joined the joyful hymn to swell,
That brought despair to vanquished hell.
With Christ we died, with Christ we rose,
When at the font His name we chose;
Oh, let not sin our robes defile,
And turn to grief the Paschal smile.”
(Roman Breviary, Easter 5th century)

Holy Thursday has arrived! It is an interesting day in the ending of the Lenten Season. It starts out with the Passover celebration, begins some important sacraments for our Church and ends in the tragedy that begins our life! A lot of endings, beginnings, and eternity all in one. It is a sobering feeling at the end of Holy Thursday Mass when the Blessed Sacrament is taken away as was Christ taken forcibly from the garden. You actually feel the void of an ’empty’ church, especially when we arrive for the Good Friday services the next day. I have to feel sorry for people who have never experienced the entirely of this week in the Church as it truly enhances the joy of Easter.

A pastor gave an interesting viewpoint on Judas’ betrayal of Jesus. I always wondered that greed could have a long-time follower and friend of Jesus do such an awful deed. Our pastor said that to him, yes, greed was the motivating reason behind Judas betraying our Lord but he thinks that, perhaps, Judas thought it wouldn’t actually be a problem. Why? Our pastor wondered if Judas wasn’t figuring on Jesus ‘disappearing’ as He had other times when he was being sought and would do so this time, too. It would leave Judas with the ‘free’ money and not hurt Jesus. Judas tried to out think God and, as we all know, this was the one instant that Jesus was prepared to be ‘found’. Maybe that is why the guilt of Judas was doubly great as his great desire for money caused this to happen to Jesus. Not Biblical, of course, but surely an interesting thought on the subject.

Makes me wonder how many times we have gone with the greed and turned our own backs on Jesus and shunned all that He suffered to save us.

Although the world is such that the bad news often outweighs the good news in the headlines, I still check to see what is happening in the world and brace myself for the sins and absurdities, the kindnesses and disrespect, the entitlement crowds, and the horrors of the wars taking human life around the world every day. To ignore this information, is to forget our need for prayer.

While each and every act of destruction upon a human being is cowardly and disgusting, the evil powers that be often manage to outdo themselves . . . as I discovered in this morning’s news. In Kenya, a group of terrorists attacked and killed students at a local college. While they flooded the place in a rain of bullets, students either ran for them lives or holed up in rooms where they hoped the locks on the doors would hold. Last report, something like 15 outright killed and 29 wounded. That’s not taking into consideration the ongoing mental anguish put upon the ones that physically survived the terror of this undeserved attack.

We live in a sad world where conflicts can be directed at unarmed students trying to educate themselves and make their world a better place. It is a reminder of how unjustly so many treated  Jesus when He started His Holy Week journey so long ago.

Remember in our thoughts and prayers the students and their families who have had their worlds irrevocably changed on Holy Thursday, 2015.

Love Being Catholic
This is so true! There is always amusement when there is a Church feast day during the week and the regular, daily Mass people find a ‘stranger’ in their pew!

Canadian Special Forces SGT Andrew Dorion asked that this picture be released in the event of his death. Please: Share this and repost it. He died on March 6th while performing his duties in the fight against ISIS with the Kurds. RIP WARRIOR! -CMH