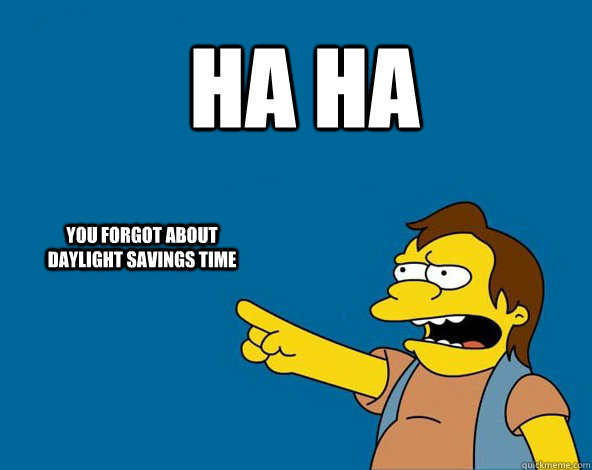 It is that time of the year, falling back in time otherwise known as the twice a year Daylight Savings. In the Spring, we ‘lose’ an hour and at this time of the year, we ‘gain’ an hour. No matter how you look at it, it is usually a pain but fun to see the people who never seem to learn showing up late for church on Sunday in the Spring and an hour early in the Fall.

When I was working in an office, the Spring Forward, lose an hour time happened. Great credits to our office as we were all in our place at the adjusted time except for one secretary. At nine o’clock, she came into work, went to the sign in sheet, signed in, and then realized that everyone else was already in place obviously having been hard at work for some time now as in an hour ‘early’. Knowing what had happened, we all watched to see when she would realize what had happened and the look on her face was priceless as we all burst out laughing.

Who is to blame for this twice a year confusion in our lives? Many say that Benjamin Franklin’s essay called, “An Economical Project for Diminishing the Cost of Light” is the original culprit. The essay suggested that people could save on candle power by making better use of available light by getting up earlier.

An interesting result of Daylight Savings occurred in 1999. The West Bank in the Middle East was on Daylight Saving while Israel and just gone back to standard time. Terrorists had plans to place bombs in Israel BUT the changeover confused the terrorist who had set timers on the bombs. The bombs were planted but went off an hour early, killing three of the terrorist.

In August 8, 2005, President George W. Bush signed the Energy Policy Act which set the official times for our current Spring Forward, Fall Backward annual scenarios. In order to cause some yearly confusion, most of Arizona does not follow this and all of Hawaii abstains from the time changes.

So, twice a year now, we all have a good excuse to be either late for Sunday appointments or an hour early for them. And, yes, the majority of us will grin about it so you might take this moment to write yourself a reminder note for remembering to adjust your clocks before going to bed on Saturday night.