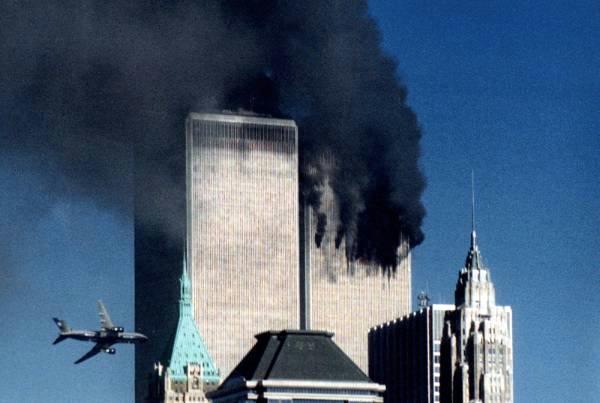 On September 11, 2001, our country was attacked by the Islamic terrorist group called al-Qaeda. Do you remember where you were and what you were doing that day?

I am an early riser so was up and checking my e-mail that morning before heading to morning Mass. There were a lot of garbled messages from people saying there was something happening, some planes crashed into each other, buildings seemed to have been hit . . . Naturally, I turned on the television and saw news reporters coming into work and skipping the makeup and usual prep to report on something no one was yet sure about.

I woke my children to get ready for the day making frequent passes by the television for news. I saw the twin towers collapse, views of people running from their lives. Later on, coverage of the planes deliberately flying into the buildings. Then the courageous passengers that prevented a plane from reaching the White House sacrificing their lives to save even more on the ground. All flights to anywhere were grounded that day as the disaster was sifted through to discover what happened and why. The four plane attacks, using our airlines, killed 2,996 people, injured more than 6,000 others, and cost millions in damage. There were many deaths later from cancer and respiratory diseases related to the 9/ll tragedy.

At morning Mass, our pastor asked us to pray for some plane crashes the cause of which he wasn’t certain as he had come to church early and hadn’t heard the total news. A friend went back to the sacristy, after Mass, and told Father. He said Father just blanched and knowing the pastor, a multitude of Rosaries and prayers were offered by him that day.

A friend and I were talking about it after Mass while our children played on the school grounds. You don’t realize how much noise planes make constantly in the air until every plane in the country is grounded. There was an extra peace and sad quiet. We thought we were in control but when one of the children suddenly pointed to the sky, our nerves jumped. It was only a bird sighted by an delighted child. For children, the world hadn’t changed too much for them.