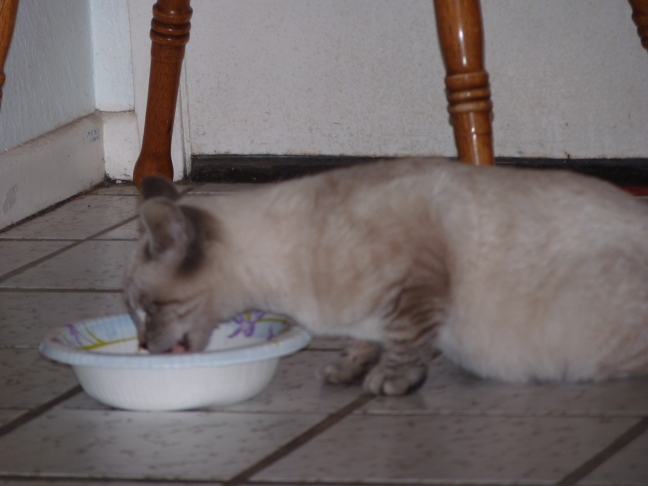 I’ve often heard that one can’t always (probably never!) chose their relatives. I speak from experience. Strangely that seems to be the same situation in regards to our cat kingdom.

Due to someone’s carelessness, about six years ago the neighborhood was left with a lot of cats who all found their way to our house. We didn’t have a cat and didn’t particularly want a cat but ended up with 15 at our doorstep. We eventually found homes for them or they wandered off to find their own homes . . . but we ended up with one ‘runt’ in the vast litter that no one seemed to want. We got our first cat. It worked out and life settled down.

In finding all those other cats homes, the day we were supposed to deposit three of them with a family in 29 Palms, one of the bunch didn’t come home and we ended up taking only two to the new home. The third one just wasn’t around so we figured it found a place or, sadly, got run over or something.

Four months later, Fresh, the missing cat came home. Being on her own, she was a feisty cat that would scratch if you petted her too long. She liked the outdoor life and slept at night in the garage. Although she played with our cat when they were front porch kittens, they hated each other now.

Two years ago, my daughter found a very placid kitten under a car next door. It was obvious it was hungry but had a ‘lily of the fields’ attitude that food would eventually come to him so no use stressing over a few hunger pains.

Last year, my husband was working in the front yard and was startled when a big gray and white mangy cat came tearing up to him screaming. Turned out that was his dinner time announcement. He was a very friendly, placid cat that ate, slept, and screamed a lot, mainly for food. My daughter found a home for him with friends and enjoys visiting him every weekend or so. He still screams for food but loves his new people and their two cats. They named his Speedy, mostly because he isn’t!

The relatives side? We were checking our security camera one morning and were shocked to see our third cat, Buster Kitten, on our front porch but before panic could set in, Buster showed up in the computer room. It was very obvious this was probably his brother if not a very close relative. He visits often at night either looking for his long-lost brother or food . . . probably food.

A few weeks ago, another cat showed up both on camera and in person. Given the yowling for food and the fur coat, Speedy had a brother. He had a collar so had a home but having lived with Speedy for awhile, dinner time was all the time. We don’t feed him but he lives in hope.

Last week, we are heading around the corner of our property on our way to the store when we saw ‘Fresh’ playing in the front lawn like she loves to do. She was hopping and prancing and just having a good time. We pulled to the curb to
open the remote garage door in case she wanted in. She looked at us and there was no recognition in her eyes at all. Fresh is a very small black cat with brilliant yellow eyes. So was this one but it wasn’t Fresh. Another relative here for a visit.

Last night, when my husband was closing up the house, he found Fresh perched up
in the tree looking down. At the foot of the tree was Speedy’s brother and Fresh’s cousin. Before Speedy’s brother could scream a dinner order, my husband deliberately turned and without looking back, went into the house and firmly closed the door. A few minutes later, the ‘right’ Fresh the Cat was at the door to come in and the door was deadbolted . . . just in case, you know!

By the way, the cat pictured above? That was one of the original invasion we named Howl because every morning he would sit on our hose box and howl for food. He left before we could find him a home and turned up four years later. He was well-fed and obviously had found himself a home. He can’t quite remember why he comes here but seems to remember that sitting on our hose box and howling resulted in food . . . but not any more.

One thought on “You Can’t Pick Your Relatives!”