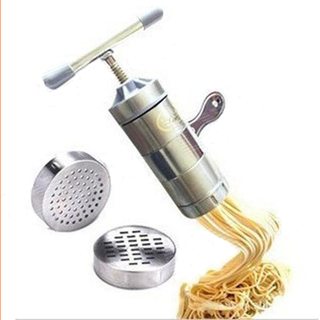 One thing we have missed since having to go gluten-free has been a big bowl of Asian Chicken soup with lots of long, slurpy noodles. Yes, there are some gluten-free spaghetti and pasta products but they aren’t quite the same and usually come with a price tag that doesn’t fit into my budget. Personally, I think the meat on the menu should be the pricey one, not the pasta/noodles.

Well, I was watching some competitive chef show on television a couple of months ago and he was going to make fresh Asian noodles and grabbed this funny, press thing, put in his dough, wound it down and long strings of beautiful noodles cascaded into the boiling water and within less than a minute . . . noodles. Well, he was, of course, using wheat flour BUT I surfed the Internet and soon came up with a gluten-free recipe and whipped up a batch of noodles I squeezed into boiling oil which resulted in the best crispy noodles ever and much less expensive than the canned version.

Basically, I use BetterBatter gluten-free blend. The recipe is BetterBatter, salt, and eggs. I usually figure on a cup per person having dinner and then just keep adding eggs until I get a dough that softly holds it’s shape. Get the water or oil going and have kitchen shears at hand because each batch put into the pot is one, very long batch of noodles. I simmer about as long as it takes me to reload the press. Each cooked batch comes out and drains in a colander before the next one goes in. Sometimes, it takes four to six eggs to get the proper dough with three cups of gluten-free flour. I toss the noodles with a little sesame oil to keep the separated and they are ready to be drowned in a batch of
Chinese Chicken Soup.