Voting time is almost upon us and this election could change the face of our nation forever. We have some definite choices between the two candidates. One is a proven liar, inept politician, extremely pro-abort, longing to bring in hundreds of thousands of questionable ‘refugees’ from the Middle East, great at doing laundry if it refers to money, and says she represents the struggles of the middle class as she spouts forth rhetoric dressed in tacky outfits which, believe it or not, cost more than some of our monthly salaries. She wants to take away our amendment rights and her plans will soon raise our taxes but will give the citizens little in return. It is proven that she had been greatly funded by Middle Eastern countries that want worldwide Sharia Law and condone the persecution of Christians, the downgrading of women, and the extermination of Jews and gays. She disrespects the military and proved her consideration of keeping our embassies overseas safe when she let Benghazi burn down and lied about why this happened. She also has health issues that have been evident. She comes with a multitude of ‘baggage’ which can and will affect how she governs our country.

Donald Trump is definitely not the perfect candidate but promises to break the establishment entanglements and forge a new path. His choices for the Supreme Court will be more advantageous to the country and not likely to pander to private interest groups like the ones chosen by obama and which may be selected by Hillary.

However, in today’s news it has stated again that Mr. Trump is getting a poor showing among the Catholic vote! Seems to me that one has some choice in voting: vote for the better candidate this election which is definitely not Hillary Clinton. Refuse to vote, period, and basically by omission send the vote Hillary’s way, or vote for Gary Johnson who supports legalized marijuana, is against military intervention, long-time supporter of abortion, and is outspoken against religious freedom as he feels it creates a bias against the gay community. He is hoping to garner 15% approval and get to be on the debate stage but, still, the chance of him getting elected are slim so there goes another 15% of the vote to Hillary.

It is certainly an interesting age for this election year but it started eight years ago when people voted for historical purposes – the first black president regardless of his capabilities which have been shown to be lacking. Now, the same lemmings are voting for Hillary because they want to vote for historical purposes AGAIN – the first woman president regardless of her fitness to run and more seriously so, the lack of care about what she represents that is in contradiction to Catholic Law.

Any thinking and informed voter does not vote on ‘feelings’, history, or thinking it is some politician’s ‘turn’ to have a go at the White House. Any thinking Catholic would be turned off completely after seeing one of her few public speeches where she said she would never stop funding planned parenthood with OUR tax money. And how often do we have a candidate running with such clouds of deceit hanging over her head.

It is amazing how one’s Catholicism goes out the window when they decide to go out on their own and vote their heart or emotions or whatever drives them to the dark side. Basically, according to the Catholic voting outlines, you vote for the candidate that is more in line with the Church. If they are both in favor of something that doesn’t sit right with you like the abortion issue, you have to vote for the one that is the lessor of the ‘two evils’. We are literally in a state of war with ISIS and, up to now, the current president pretty much pretends it isn’t a problem while Christians and Jews suffer. Hillary is an extension of the last eight years. Trump IS the lessor of the ‘two evils’ by a long shot. In this election, not voting shouldn’t even be on the table for any caring American. We know what Hillary brings with her being in the ‘employ’ of Islam. Trump doesn’t owe anyone anything. It basically comes down to voting for an adamant, proud supporter of abortion at all stages or a man who hasn’t taken on that issue to such an extent. In this election, we have more of a chance with the unknown future. We have everything to lose with a Democratic win and four years more of the same.

“I hear that train a comin’
It’s rollin’ round the bend.
Gonna pick up Mrs. Clinton
And take her to the pen.

They’ve got an orange pants suit
Hangin’ on the wall
And a cell for Bubba Willie
Just a little down the hall.

We’ll put ‘em in the big house
Lock them up inside.
Unless a whole lot of witnesses
Commit suicide.

Remember James McDougal
And 20 or 30 more
About to testify,
they found ‘em dead upon the floor.

Now they’re pilin’ up the bodies
Like they did back then
They want back in the White House
Here we go again.

White trash in the White House
Beats all I’ve ever seen.
Hillary for prison
two thousand and sixteen.”

“May my children discover the sweetness of being found again! Fulton J. Sheen

“One is never bored with doing the Will of God” St. Catherine of Laboure’

“What God loves more than all else is to be loved, and God does not ask us what we were; He is only interested in what we are today.” Father John Joseph Lataste

“I would like to empty Purgatory with one hand, and with the other to fill it with souls snatched from the brink of Hell.” Blessed Mary of Providence

“The casting of the ballot is the supreme act of citizenship. Ballot in hand, the citizen is a sovereign, and with his fellow-citizens he decided the destiny of the Republic.” Archbishop Ireland: American Citizenship Chicago, February 22, 1895.

The American who does not care to vote on election day, deserved disenfranchisement or exile: the American who boasts of his political indolence proclaims his own shame.” Archbishop Ireland: American Citizenship Chicago, February 22, 1895. 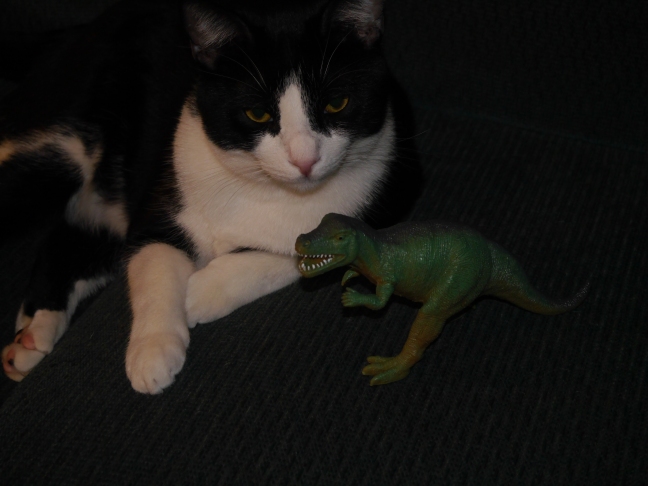 Almost a year ago, we found a small kitten just sitting under the neighbor’s car. We remarked about the cute cat and they said it wasn’t their cat but had been sitting there for three days. It was a very chill little cat and very friendly in spite of being very hungry and thirsty. My husband made a tactical error in pointing out the cute kitten next door because next thing we knew, said kitten was in the house and named Buster Kitten! He remains here to this day registered at the vet’s office as belonging to us!

Although the cat is not a big eater, what he does ingest seems to give him great growing power as within four months, he was larger than our four-year old cat. He didn’t stop there. He isn’t fat but a huge bundle of muscle and last time we weighed him, he was 16 pounds 9 ounces. The other cat is tall, thin and weighs in at ‘only’
eleven pounds.

Someone asked me to take a picture of Buster Kitten next to something to show exactly how large he is in comparison. Sad to say, an historic dinosaur bit the dust in order to show this. Hey! You don’t believe we happened to have the last, full-sized dinosaur available for this picture op? O most holy Confessor of the Lord, Benedict, father and guide of monks, intercede for our salvation and that of everyone.

Lord, God of armies, convert us.

Show us Thy Face and we shall be saved.

Awaken, O Lord, in Thy Church the Spirit that our blessed FAther Saint Benedict obeyed, so that, filled with the same Spirit we may strive to love what he loved and practice what he taught.

Grant us the grace to persevere in the service of Thy will, so that our days may see the people of Thy servants grow in merit and number.

Through Christ Our Lord. Amen.

What God must think of His people. The last two elections gave an adamant pro-abort candidate over 50% of the Catholic vote. After eight years of lies, failures, and misguided governing aimed at looking good rather than doing good, you would think the citizens of this country, especially the Catholics would have figured things out.

Actually, I truly found it hard to believe that fifty percent of the Catholics thought it was a good idea to vote the pro-abort ticket the first time around. Although I had already made up my mind, I read the Voter’s Guide for Serious Catholics I found in the back of my parish church and it confirmed to me without giving a specific name that voting for obama was not a Catholic vote. Liberalism, which IS a sin, won again . . . with the help of Catholics!

Today, I learned from the CatholicVote site that once again the Catholic vote, according to a recent polling, is going to Hillary by a wide margin. What about the Catholic Church, sinfulness, and failed decisions don’t these people understand? Over the past couple of years, she has been caught in lies, deceit, and ineptness in everything except for wrangling for votes. Like sheep to the slaughter, here come the Catholics willing and happy to help bequeath another four years of aborted babies, loss of rights, and the promise of thousands of imported refugees who aren’t seeking asylum so much as a conquest.

1 Samuel Chapter 12 shows that human disregard of God’s Laws over their selfish desires of independence from God aren’t anything new. Wouldn’t you think, however, that at some point a light bulb would go off somewhere among all those hardheaded (hardhearted?) voters and lead them to turn to God first. And, if Hillary gets into office and bans many of our amendment rights and we find ourselves deprived of the basic right to defend ourselves, remember that gun deaths are no where near the top of the list for deaths in American . . . abortion is.