I didn’t know that there is practically a “National Day of . . .” for most every day of the year! Having discovered this, I looked up what we should be observing today, February 23rd and I think both options are doable.

Today is National Banana Bread Day which coincides nicely with the fact that I have some aging banana on the counter that need a final resting place. Perhaps, there is baking in my immediate future.

Not sure how to observe the second option for national celebrations today but besides being National Banana Bread Day, it is also, National Dog Biscuit Day. Since my two dogs get a dog biscuit each morning, I guess we have safely covered that without a second thought.

So, you can mark your calendars, tomorrow is National Tortilla Chip day. Again, we have some on hand so, inadvertently, we have been quite observant on this one festive day in our week. The other commemoration day, tomorrow, is Spay Day USA. My two dogs and two cats just sighed when I told them and said, “Been there, done that.” 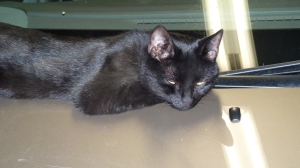 “A man’s silence is wonderful to listen to.”
— Thomas Hardy

“People want economy and they will pay any price to get it.”
— Lee Iacocca

“Laugh and the world laughs with you, snore and you sleep alone.”
— Anthony Burgess

“Boys will be boys, and so will a lot of middle-aged men.”
— Kin Hubbard 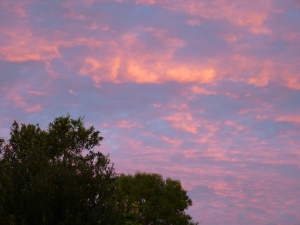 On Valentine’s Day, my husband gave me a large bouquet of flowers. The flowers were beautiful but we forgot that our cat, Marcella, has an absolute terror of bouquets – any size, any flower, she freaks out and hides in the closet for hours. Once she caught sight of this new blight on her usually happy existence, she sought spiritual help in my bedroom as evidence by the picture belong.

Meanwhile, Fresh (pictured last) is a scamp and curious. Against all rules of the house, her interest in the bouquet could not be contained and she hopped on the table for a better look and was so overcome that she threw her paws around the vase, buried her face in the glory of the greenery . . . and knocked over the vase full of flowers . . . and lots of water. Did it startle her? No. She went down to the floor and happily watched the water cascade from the table to the chair to a pond on the floor. She was thinking about lapping up some water as activities make her thirsty but she was quickly ushered out the door for the rest of the morning. 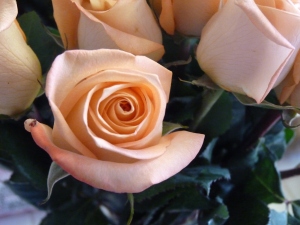 This marks the beginning of the Lenten Season for Catholics and some other denominations. Unlike the olden days, we have things a whole lot easier as our only days of Fast are Ash Wednesday and Good Friday. The lenient ‘no meat’ rule of recent times is rescinded and all Fridays in Lent are ones of abstinence. Although I have heard a few priests, over the years, remind the congregations about this, I don’t think the message actually gets through to the majority. I remember taking my children to Costco one Friday during Lent for a meatless snack. The snack area was packed with people and I’m sure a majority of them were Catholic yet every person sitting there was having something with meat.

Ash Wednesday is also the day everyone comes out of the woodwork and even if they haven’t attended Mass the rest of the year, they show up for the ‘free’ ashes. Some people actually think that you will have bad luck if you don’t receive the ashes on Ash Wednesday. Seems to me, one would face worse than bad luck to only attend Mass once a year. I remember shopping one Ash Wednesday after Mass and a woman ahead of me in line at the check out kept staring at me. When she walked over, I was prepared to explain and defend the ashes on my forehead. Surprisingly, she asked, “Where did you get those and did you have to attend Mass to get them?”

Ash Wednesday is the first day of Lent. According to the Church year, it occurs 46 days before Easter and is a ‘moveable’ feast which can be on the calendar as early as February 4th our as late as March 10th.

According to Matthew, Mark, and Luke, Jesus spent 40 days fasting in the desert. Ash Wednesday is our 40-day liturgical period of fasting and prayer. We get the name Ash Wednesday by the practice of placing ashes on the foreheads of the people. This reminds us of our mortality and of our repentance. The ashes used are gathered from the burning of the palms from the previous year’s Palm Sunday.

The one aspect I dislike about the Ash Wednesdays of recent years are the untrained extraordinary ministers distributing ashes. The solemnity of the occasion is often marred by the female ministers who grin and greet people they know as they haphazardly smear on ashes. I guess that it might be God’s way of getting us ready for offering up sacrifices for the duration of Lent!

Just remember that if you are a Catholic, know that Ash Wednesday is not a holy day of obligation. You will not have bad/good luck depending on whether you receive ashes or not. One person actually told me that when I wiped off ashes that had gotten into my eyes and nose that I had to turn in the used tissue to the priest as it had to be burned in respect. Not so. No meat today or on the Fridays of Lent. If you are an adult, fasting today and Good Friday. And since this is the beginning of a penitential season, try not to trample other people in line for ashes. I’m sure the priest has enough to go around!

For Lent each year we abstain from meat on Wednesdays and Fridays. Coming up with meatless meals twice a week is sometimes a challenge. I’ve discovered, however, that you can put just about anything in a tortilla, bake it, and the family is thrilled. Today, my son asked if we could have those meatless tortilla things, again.

Given that Ash Wednesday is this week, I’m going to have to review my meatless recipes. A favorite around here is lentils over rice with grated cheese. Since half of my children can be super picky about what they eat, the fact that they like lentils is a continued source of amazement to me. In fact, while still at college, my older daughter made it for her dorm and college friends one evening. No one had had them before but after days of cafeteria food, one of the friends was heard to sigh, “I don’t know what this is but it feels healthy!”

I like meatless meals and look forward to having spinach lasagna a few times in the next six weeks. Not as popular with the rest of my clan as they want meat in their food.

As mentioned in the intro of this post, you can stuff a large tortilla with refried beans, cheese, rice, and bake it in the oven with a cheese sauce. The cheese with the beans forms a complete protein so you keep to the sacrifice and still nurish the family!

Lest you think we are not being sacrifical enough with our meatless Wednesday, my burden of proof is that my husband eats leftovers at work for dinner two to three days a week so he will require two meatless meals two or more days a week. That sometimes means that we might have meatless on another day in order to provide the needed meal for my husband. I figure the fact that we have food on the table every day of the week should keep us from complaining too much about whether it has meat or not.

We came up with this idea when the children were little. We wanted to impart the reality of the action of sacrifice in terms they could understand. We also abstain from eating out during the six weeks of Lent. That means planning our excursions so that we are home when it is a meal time. As little ones, the children enjoyed being part of the plans and some of this tradition has, hopefully, seeped into their grown up years.

Every Lent, our meatless Wednesday remind me of an elderly gentleman at our church who has now gone to his reward. When we were once talking about Lent, he lit up when I said we didn’t eat meat on Wednesdays. He said that when he was growing up, his mother strictly adhered to meatless Fridays all year round as well as meatless Wednesday throughout the year. One time, he asked her why she did this and she said, “No meat on Fridays because we are Catholic and believe in sacrifice. No meat on Wednesdays . . . because that was the day YOU were born!”

Grant us, O Lord, to begin the service of our Christian warfare with holy fasting; that as we are about to fight against spiritual powers of wickedness, we may be fortified by the aid of self-denial.