Every year, there is a silly event at the White House where the president ‘pardons’ a turkey and promises the bird that he or she will not have to be ‘dressed’ and present at the Thanksgiving table. I don’t understand the reasoning behind this and it seems more like an annual photo op than a meaningful occasion. And, to take the matter a sarcastic step further, shouldn’t the previous felon turkeys be present when another of their brotherhood is pardoned and joins their ranks?

The Mayor of Seattle has decided to follow suit in a rather interesting manner which leaves a lot of questions unanswered. The mayor pardoned a ‘tofurkey’. For the uninitiated, a tofurkey is a vegetarian version of the Thanksgiving bird comprised of Tofu. So, my questions are:

Where will the tofurkey be retired to for the remainder of it’s life? Refrigeration in eternity? Frozen to be ‘revived’ at a later date?

Did the pardoned tofurkey have a name so we can remember it fondly?

Is there a tofurkey farm we’ve never heard of where pardoned tofurkeys go to spend the rest of their shelf life, I mean days?

And to take a more serious view of all the pardoning going on, wouldn’t it be nice if, instead of a turkey or tofurkey, our elected officials would start pardoning the unborn scheduled for death that day? Or any day for that matter . . .

We had a wonderful Thanksgiving, yesterday. The only time we went out to the store was an emergency run for a carton of milk. My husband said the store was unusually crowded as if they had woken up and suddenly realized it was Thanksgiving and they had company coming for dinner. We wanted a family and friends day at home. Although we do ‘observe’ leftover turkey today this Friday, we don’t participate in the shopping rages going on at all the stores and malls beginning early this morning. I will get up early for church. I can get myself out of bed to catch a plane. I will lose sleep in order to get children to work and school. I will not get up and go to the stores at four in the morning to stand out in the cold, pushed up against masses of strangers to save a few dollars on items I probably don’t even need.

We read in the paper about some people who have been camped out since earlier in the month in order to be first in line at some electronics store. We watch the news clips of the people pouring into store doors before the doors are hardly opened, risking life and limb for the almighty bargain.

I’m a year-round shopper and am always on the look out for a good deal. By the time the Black Friday sales begin, I’m already done with my Christmas shopping. I think that if I compared savings with a Black Friday shopper, I’d probably find I saved as much as they did without trampling anyone in the process.

One year, my daughter and I went to Walmart in the afternoon on a Black Friday when the crowds had gone home for the most part. We stepped into the store and the floor was literally piled with discarded items. They had a circle of shopping carts which numbered more than 30 filled with items that needed to be returned to the shelves. As we wandered through the store in horrid fascination, we actually saw some remnants of the early morning mob still poking through items, tearing open sealed boxes, inspecting it, and then tossing box and item back on the floor. Obviously, these Black Friday lemmings don’t know the first thing about how a business works and missed any economics class that might have been offered in their youth. The more that is destroyed in the process of their greedy, disrespectful scavenger hunt, the higher the cost of merchandise next cycle. Someone has to pay for the damaged/stolen items in a store and that loss is figured in how much is charged the next time the shelves are stocked.

Like anyone else, I like a bargain but I don’t want to lose my dignity in obtaining it. Greed is also a seed in the human makeup and that’s all I see in the crowds whose greed grows as they push and shove their fellow man in order to get every bargain they want for their own.

“O covetousness, so hasty to submerge
Mortals, that each and all are powerless
To draw their eyes forth from they blinding surge!”

As Catholics should know by now, we no longer (except in Lent) have to abstain from meat on Fridays BUT and this is a huge reminder, we DO have to make a sacrifice in lieu of the meat abstinence.

In the 1950’s, Venerable Pope Pius XII officially granted Americans a dispensation from the Friday abstinence of the day so they could enjoy their leftover turkey the Friday after Thanksgiving.

There was a lot of scrupulosity as the years went on after the pronouncement by Pope Pius XII that he only meant it because of the refrigeration issues in those days, etc., but what the Pope said was plain and simple was for Americans to enjoy their turkey on Friday with no reservations or caveats about the future, modern improvement in meat preservation via refrigeration.

As we are also ‘forgetful’ Catholics, our family continues with the Friday abstinence on the Fridays of the year, so were happy to learn that we are ‘required-sacrifice free’ the day after Thanksgiving Day. We can eat our turkey (or ham) without replacing the treat with another sacrifice. I’m thinking that given this dispensation, so many decades ago, we might consider a more prayerful day before, during, and after our mini-Thanksgiving meal with the leftovers on Friday. Wouldn’t hurt to send a prayer of thanksgiving in honor of Pope Pius XII, too.

I have been informed by a friend that in addition to the . . .

Spring Forward – setting your clocks ahead an hour in the first part of the year . . .

Fall Backward – setting your clocks back an hour in the last part part of the year . . .

We have to remember the Thanksgiving setting of . . .

Setting our bathroom scales back 15 pounds. Really makes sense to me! 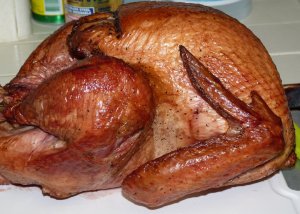 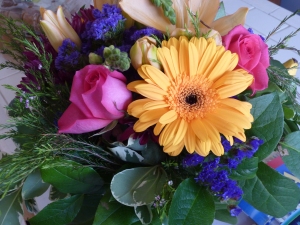 Always nice to have a last-minute, go-to recipe at hand in case you have to stretch the dessert offering for unexpected guests or need a little something to tide people over as the turkey finishes roasting to perfection. Given the season, one is most likely to have an extra can of pumpkin on hand and could put this cookie recipe together in quick time. Nothing like coming into the house to the scent of fresh cookies exiting the oven.

Preheat oven to 375 degrees. Either line baking sheets with parchment or use vegetable oil spray to grease them.

Cream together the shortening and brown sugar. Beat in the eggs thoroughly. Add in the vanilla, orange zest, and pumpkin. Stir together the dry ingredients and blend into the creamed pumpkin mixture. Stir in the cranberries and nuts.

Drop dough in heaping spoonfuls (teaspoon or tablespoon size, you decide!) onto prepared baking sheets. Bake for approximate 10-15 minutes depending on size. When light brown and slightly firm to the touch, remove to a cooling rack. Glaze with orange icing. If you have some holiday sprinkles on hand, go for it! 🙂 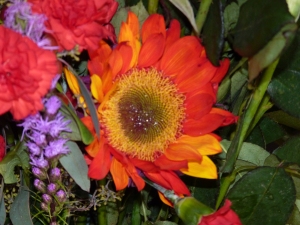 These days, our annual Thanksgiving is celebrated in the United States on the fourth Thursday in November. With Christmas and New Years in close proximity, Thanksgiving can be considered the opening of the winter holiday season.

Thanksgiving was declared a Federal holiday by President Abraham Lincoln in 1863. President Lincoln proclaimed it a national day of:

“Thanksgiving and Praise to our beneficent Father who dwelleth in the Heavens.”

The event upon which Thanksgiving was based and called the ‘First Thanksgiving’ was celebrated by the Pilgrims after their first harvest in 1621. According to an account by Edward Winslow, the celebration lasted three days and was attended by almost 100 Native Americans and 53 Pilgrims. Offering thanksgiving was not a new idea as the English colonist would always have days of thanks to thank God for military victories, the end of some hardship, etc.

If celebrated in the spirit it was begun, it is firstly a day of thankfulness for the blessings we have received during the year. Unfortunately, as those years have gone by, more people forego the warmth of a family gathering in order to trample their fellow man in the pursuit of the carrot dangled before them by the many stores staying open on this day to take in our money for the sake of a bargain. Sad that a country founded on the belief of God has reduced the blessings of being truly thankful in exchange for yet another rush into the materialistic frenzy of the commercial market place.

“Give thanks frequently to God for all the benefits He has conferred on you, that you may be worthy to receive more.” St. Louis IX of France 136h century.

“One act of thanksgiving, when things go wrong with us, is worth a thousand thanks when things are agreeable to our inclinations.” Blessed John of Avila 16th century

Ferguson, Missouri is a town that has been in the news since the summer and won’t soon be forgotten. A very sad event took place in the town and an 18-year old man was gunned down. A lot of problems came to light as a result of the media blitz on this town during the course of the subsequent investigation. A family lost a son and that sorrow was diminished in the crowd of people who used the cover of ‘righteousness’ to loot and destroy private businesses and property that shouldn’t even have come into the situation. There were factions that had a reason to protest and there was a group who used it to steal. These thugs overshadowed the heart of the dismay of the peaceful protesters with their hurtful, damaging greed in taking advantage of the situation.

Last night, the decision came down on whether the policeman involved in the summer shooting death would be indicted or not. The announcement was well-presented and it was obvious that the system of law in place in our country went to great lengths to find all the witnesses and interview them more than once to insure their stories were true. The jurors were not new to the system as when you get chosen for a Federal Jury, you are chosen for a year of duty. The jurors had been in place long before the Michael Brown case so no forethought or prejudice was involved in their selection. The verdict did not please many people but the ones who were truly interested in the situation, protested peacefully and might eventually be moved to work towards more conversations and changes to help prevent this from happening, again.

Again, however, there were groups of other people who didn’t care so much for the outcome of the jury deliberations but the chance to crash, burn, and steal from private businesses and call it justifiable anger. Tell me, is destroying someone’s family grocery store and making off with a ‘free’ case of beer conducive to future changes to the good in the future? Interesting to note that many of the damaged/destroyed stores were owned by minorities.

Today is a day to reflect on all this and pray for continued justice in the land with changes where they need to be implemented. Prayers should go out to the family of the deceased son.  Perhaps, we should also pray for the felons who destroyed people’s livelihood in their own version of a self-centered hoodlum violence that they might be brought to justice.