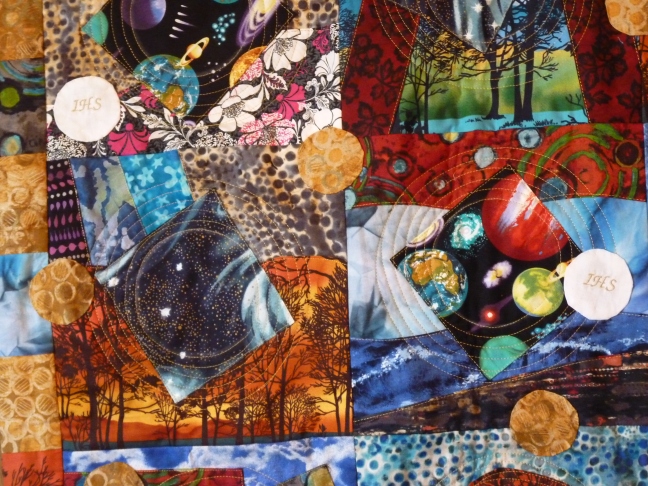 Got my favorite last stitch done on another project today – my story quilt. Although I couldn’t get a good shot of the entire quilt, there is enough to figure out the story from the title: Chaos, Fool’s Gold, And Kept Promises. 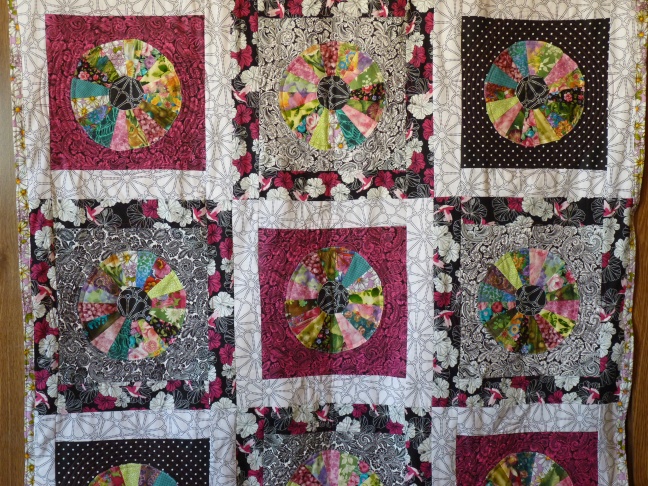 After I was treated to a trip to the fabric warehouse and came home with new fabric, I figured I should try and complete some pending projects first. This one has been sitting on my sewing table for about three months. Every time I need to get to the sewing machine, this quilt had to be relocated because my need for the sewing machine didn’t concern actually finishing this one!

Either new vitamins or guilt had me complete TWO projects this week and I just threw them on top of other completed one in my room. They are officially off the sewing table.

In this quilt, I was seeing what I could do with the black and white prints in conjunction with the pink ones that had similar patterns. I got a lot of scraps used for the Dresden Plate circles and the idea seemed to work out pretty well. I got to do may favorite part of making a quilt today . . . The last stitch! 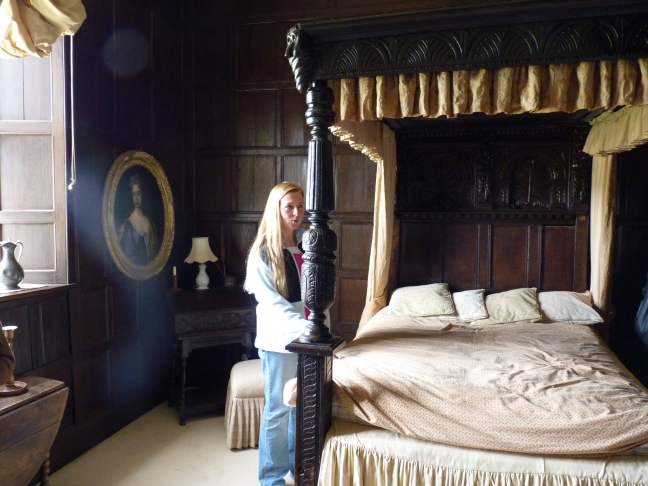 The actual bedchamber where the events described in the previous post were said to have happened. 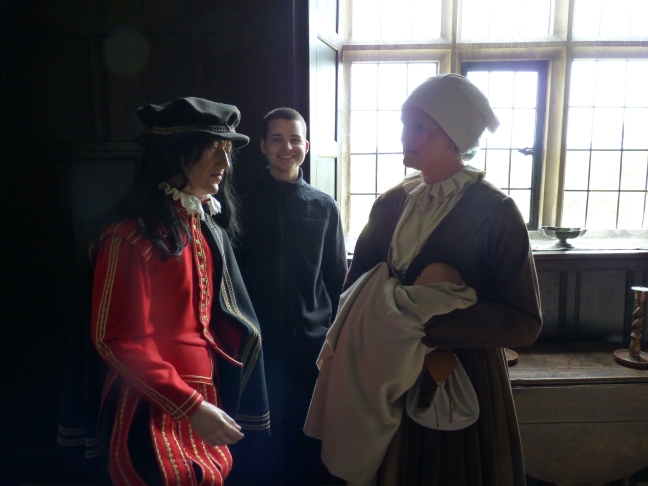 One of first sights we visited in England was Littlecote House. During World War II it was used as a command post for the military. It has been said that ghosts would bother people sleeping there but I haven’t heard of any such problems during the Americans stay there. There is, however, quite a ghost story involved with LittleCote House . . . several, in fact, but this is one I recall more readily.

One night a midwife in the village was wakened late one night. She was offered a good sum of money, more than the usual going rate, to attend a woman in labor and deliver the baby. The one request was that she be blindfolded to be taken to the woman’s side. She agreed and ended up in the bedroom of a large house. A masked man asked her to deliver the baby. The woman in labor was also masked. The baby boy was delivered without problem. Immediately, the masked man took the baby and threw it on the roaring, open fire and let it burn to death. Naturally, the midwife was more than shocked but she, probably in fear of her own life, checked on the progress of the mother. Before she left the bedroom, the midwife ripped a piece of cloth from the bed curtains and hid it upon herself. Soon, she was blindfolded again and led down the steps of the house. She counted the steps as she went down.

The midwife never told a soul until upon her deathbed. Immediately, suspicion fell on Wild Will Darrell of Littlecote House. Suspicions were raised that the masked mother might be his sister and that Darrell could have been the father. The steps to the house were counted and came to the exact number given by the dying midwife. In the bedchamber, a torn hole was found in the bed curtains that matched the piece in the possession of the midwife. Wild Will Darrell was promptly arrested but, for lack of evidence, he walked.
End of story? Darrell was thrown from his horse in 1587 and killed instantly. The place is known as Darrell’s Stile. It is said that his spectre has visited both the scene of his death and in the bedroom were the baby boy was so brutally killed. A journalist, in 1970, claims to have seen the figure of a midwife carrying a baby in the haunted bedroom. Before he could reach his camera, the apparition was gone.

We got to visit the room where this tragic event occurred. To make it more visual, they had wax figures of the midwife, baby, and Wild Will Darrel. After the tour, we were allowed to wander through the vast house and, if we wanted, to revisit some of the rooms we had seen. We ventured into the bedroom but soon made an exit. It was good to get outside into the sunshine. The amazing thing about Littlecote is that anyone is welcome to come in and look around. Fortunately, we had a good tour guide who knew all the stories and told them extremely well . . . too well, perhaps. Obviously, my son in the background, wasn’t overly frightened about the story! 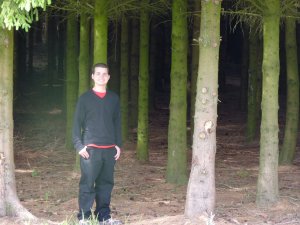 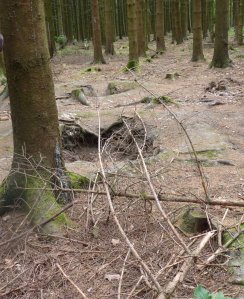 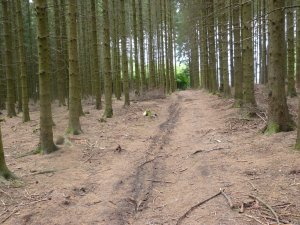 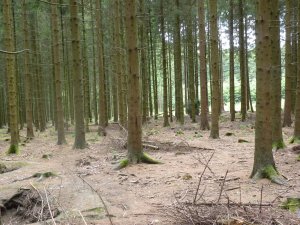 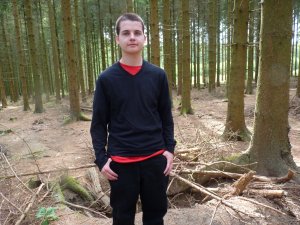 North of Bastogne, Belgium between Foy and Bizory lies the Bois Jacques forest. During WWII’s Battle of the Bulge, this area was held by members of Easy Company, 506th PIR, 101st Airborne Division. Numerous remnants of foxholes can be found in the tree line along the road between Foy and Bizory. If you look at the pictures, you will see the fox holes are not that big nor, I imagine, were they very comfortable. We were there in the light of day but the trees shadowed the place and it wasn’t warm. Fox hole fighting was not a great occupation. 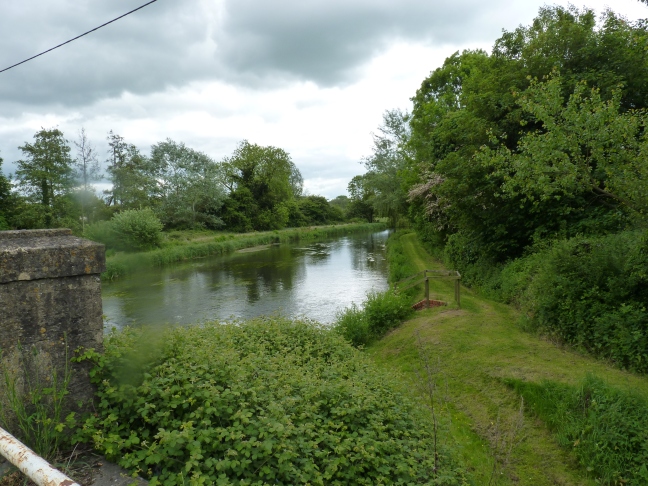 My husband picked up an old paperback book for me from the used book section at his library. The original price on the book was fifty cents which should reveal starkly exactly how far back this book was written! It’s first printing was 1928 and the last printing was 1957. As with books about the ‘olden times’, it had a lot of profound insights which made it readable on several levels.

The book was Mr. Blue by Myles Connolly. It was about Mr. Blue who was seemingly a bit of an eccentric but who really had the most basic grasp on being a Christian and a man of valor. I plan to read it, again, as there seemed to be more between the lines to discover.

There was a poem ‘written’ by the main character, Mr. Blue, that certainly showed one how much God loved his mortal creatures. I thought I’d share it here with you.

Human love is blind-
But how strange the love must be
Of the good and gracious God
Who died for the like of me.
So herein let us have hope
That our squalor finds disguise
In the splendor of His heart,
In the glory of His eyes . . .

The book meandered seemingly without purpose with no real beginning or end, just an enduring hope. 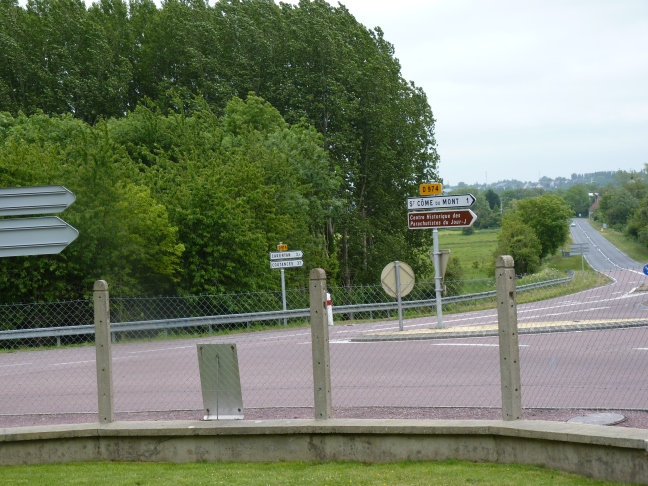 When one stands at the top of the entrance stairs at the Dead Man’s Corner Museum, we can see the intersection where the burned out tank and body sat while solders poured into the area and a battle was going on. It is hard to imagine how it must have looked on that battle weary day so long ago. It was a good moment to remember to send a prayer out to the soldiers who were first in line with their tank and one of the first to give their lives for what was at stake. 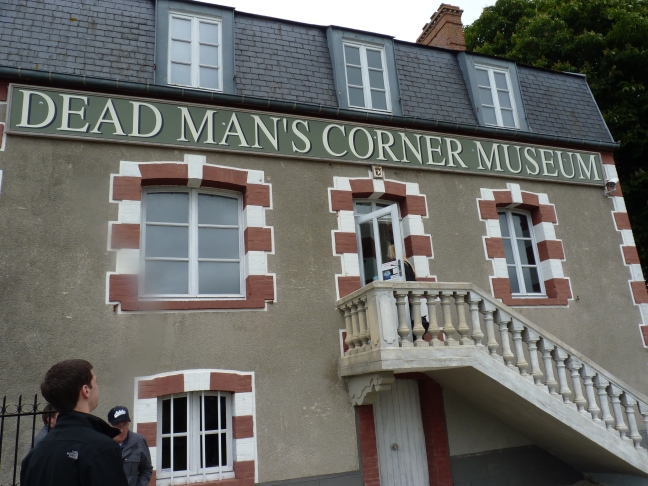 It was in the early hours of June 6, 1944 that both the U.S. 82nd Airborne Division and the 101st Airbourne Divisions landed at the base of the Contentin Peninsula. The Cotentin Peninsular, also known as the Cherbourg Peninsual, is a peninsula in Normandy that forms part of the northwest coast of France. Immediately after the landings, the main priority of the Allies at Utah Beach was to join up with the Allied landings further east. This job was given to the 101st division who had landed in the area and had been making raids against inland targets. This was to help secure and cut off the landings from German artillery threats as well as further reinforcements.

Saint-Come-de-Mont was one of the major objectives to reach Carentan after capturing and destroying the bridges on Carentan causeway. Several attempts were make to take Saint-Come-du-Mont. On D-Day, Captain Samuel Gibbons and fifty soldiers tried and failed to take the town. The Germans were in the town and were strong enough to hold it at that point.

During one of the attempts, an American M5 Stuart light tank was hit by an armor piercing shell and the whole crew was killed instantly. The tank commander’s burnt corpse was partially sticking out of the turret. The intersection where this incident occurred became known as Dead Man’s Corner. To this day, it is still referred to by that name.

My son and I were able to visit the Dead Man’s Corner Museum. It was a somber experience to look out from the top of the entrance stairs and see the intersection where the tank was destroyed. From what we learned, it was several days before they could move the tank or give proper respect to the deceased. A battle was on and the directions passed back was to travel past ‘the dead man on the corner’ thus the historical name today. 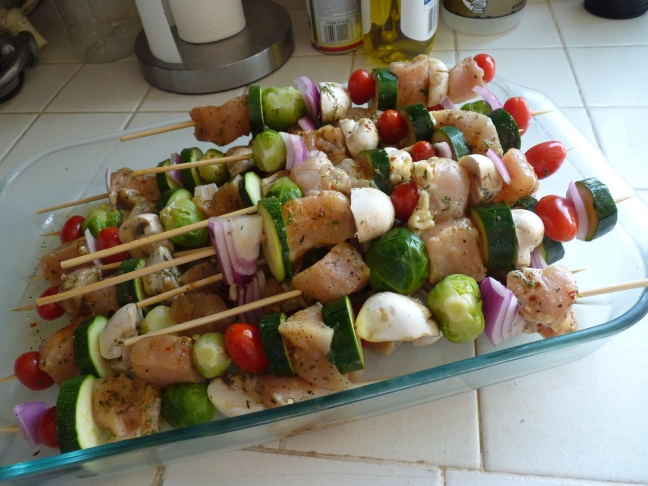 My husband and I go back and forth on whether to get an outside gas grill or not. Meantime, I would like to do meat menus a bit differently. Today, in order to sort of disguise the fact that the budget dictates chicken again this week, I decided to make skewers. Initially, I thought going with the broiler in the oven but it is small and would only nicely do five or six of the skewers at a time. Google to the rescue as I searched for oven-baking said skewers and it seems I’m not the only one without a suitable grill. At this moment, the meal is happily cooking in the oven on baking sheets. The prescribed temperature is a preheated 450 degree oven and, so far, it looks like dinner is going to be pretty good.